Will Pop and Bang Tuning Damage My Engine ?

Will pop and bang tuning damage my engine ?

So will pop and bang tuning damage my engine? Well firstly, what is pop and bang tuning, originally known as Anti-lag tuning. This type of tuning stems from 80’s motorsport, and is in fact very clever. The older style of turbos were large by normal turbo sizes today. And once they slowed down there was a long delay in the power coming back to full boost – commonly known as turbo lag. It was discovered that by adding a little extra fuel after the normal ignition cycle, a second ignition could be generated which kept the turbo spooling and meant the boost pressure did not drop off. Great for Motorsport performance – but with new modern hybrid and multi turbo cars true anti-lag tuning is not a requirement now.

But as we all know, the side effect of anti-lag tuning, is the pops and the bangs it generates from the additional exhaust ignition. Street racers and modified car owners love it, the neighbours hate it!

Pop and bang tuning has certainly gained a poor reputation. But social acceptance aside, is it true pops and bangs tuning can damage your engine?

The short answer is yes! The excess fuel added to cause the anti-lag and pops is not at all good for the longevity of an engine. Race cars regularly have oil changes, pretty much after every use, and you really do expect engine and turbo damage when running under extreme conditions and vehicle set-up in motorsport.

But when we move this type of tuning to everyday road vehicles that same excessive wear and damage still takes place.

So what’s wrong with pops and bangs tuning?

Issue number one, the excess fuel dilutes your oil

It’s almost a rule of thumb that every tuner will dump excess fuel into the engine when you lift off the accelerator to create these synthetic pops and bangs. As the fuel vaporizes on the hot metal, it brings some heat out with it, which helps to cool your engine. However, some fuel remains unburned inside the cylinder and mixes with the oil lubricating the cylinder walls and around the oil scraper rings in the pistons. – This is not good!

The oil and petrol mixture can then wash down past your piston rings and into the sump, mixing with the oil and diluting it out. Oil is responsible for lubricating the moving parts of the engine of course. If the oil thins out with fuel, it will lose its lubrication power, which can result in increased engine wear, leading to eventual engine seizing, crank and bearings failing, as well as piston / conrod failure – resulting in instant catastrophic engine failure.

A broken piston can leave you broke in more ways than one. As the excessive fuel burn causes the pops and bangs, some of it will ignite in the piston chamber. This in turn can cause detonation, (small additional burning at random points across the piston surface). Though tough, the piston design cant cope with this type of combustion. Detonation tends to be a slow killer, it may last many months even a year or so depending on how the vehicle is driven and for how long. But sooner or later, your piston will crack, or burn through – the result when it finally fails. Instant catastrophic engine failure.

Exhaust valves can get burned

In some pop and bang tunes, the spark plugs fire as the fuel escapes through the exhaust ports. This is done through massive retardation (delaying) of the ignition timing. This causes a massive peek in EGT (Exhaust gas temperature). As a result, your exhaust valves are literally cremated. Which will either cause them to fail to seal properly or damage them permanently. It doesn’t do your engine any good either way.

For turbocharged engines, the high increase in EGT are just as bad. As the extra hot exhaust gas mix enters the turbo at temperatures the turbo design cant cope with. The excessive heat can cause permanent damage to the metal and cook seals and bearings. And in more extreme cases of tuning, there can be damage to the turbo fins by the sheer force of the fuel mix igniting.

So what is the answer if you still want Pop and bang tuning ? 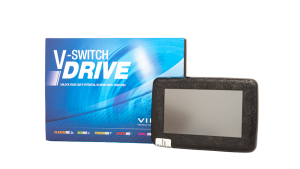 VIEZU Switchable Tuning – V-Switch. If you are still keen to have pops and bangs on your car there are options. Such as, have them installed through a switchable tuning system, like the V-Switch. This means when you are attending shows and events and want to make some noise for a little while. You can activate your popping tuning setting. And then after the event and for daily driving you can revert to a normal fast performance tuning setting. Without the pops and bangs of course. Reducing the risk to your engine and keeping your neighbours on friendly terms too.

You can see more on the V-Switch device here: https://viezu.com/v-switch/