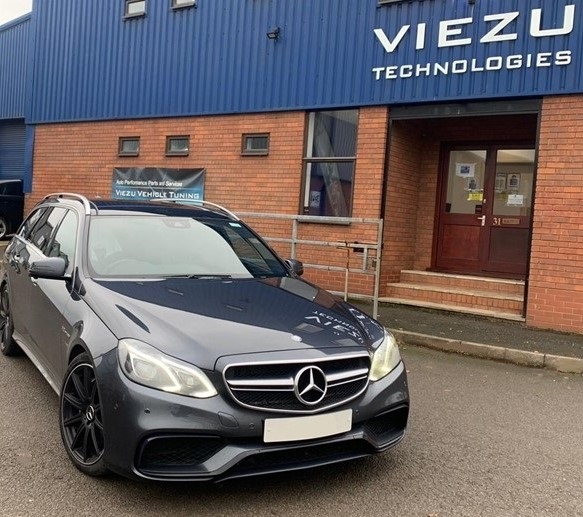 To showcase the amazing upgrade potential of these vehicles, Viezu Technologies put a Mercedes Benz E63 S AMG 5.5 twin turbo on the dyno and carried out a complete custom engine remapping and tuning session on the vehicle.

The standard Mercedes AMG 63 produces 571hp (420kw) in stock factory trim and a staggering 800nm (590 ft lbs) of torque. Whilst the stock figures are impressive, this engine is running in a sleepy lethargic mode at these power lowers, a slumbering beast if you will.

On the Mustang MD500 – AWD dyno, Viezu recorded 574hp at the crank and 564 ft lbs. The torque was a little down on factory spec but the hp was up a little. This is well within the expected power figures for a car such as this to run on the dyno in real world climate and air temperatures. 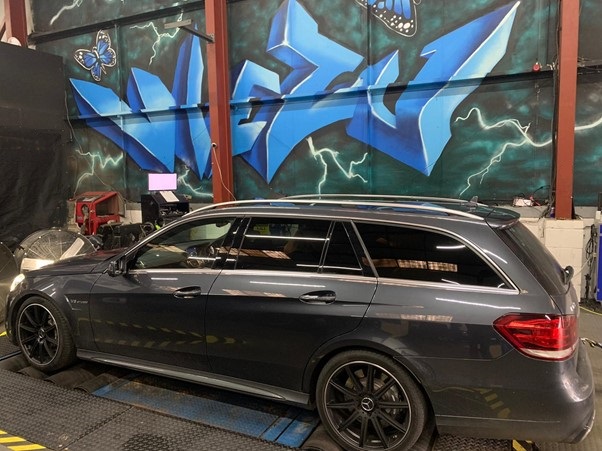 After confirming the stock power figures on the dyno and datalogging the all important fuelling, boost levels, ignition timing, cam angles and a plethora of other important data values from the dyno runs, Viezu downloaded a copy of the Mercedes ECU software. This was carried out using the Alientech Kess V2 connected through the cars OBD port.

Awakening the best and tuning the Mercedes 5.5 V8 Twin Turbo AMG engine is not a simple task, but its one VIEZU are more than ready for, Viezu’s highly trained team of ecu remapping experts set about making the necessary changes and optimisations within the factory OEM software. Viezu Technologies technical support and file writing team needed to make over 3500 changes to the ECU data to extract the full potential of this monstrous engine. All of these changes were done through a combination of the real world data recorded from the ECU on the dyno, decades of ECU remapping and performance car tuning experience and a dedicated to SMART tuning methodology in order to extract the optimum from the ECU and engine in the safest way possible.

Delivering Mercedes AMG 63 tuning that is simply stunningly improved over the already lively performance of this great car. 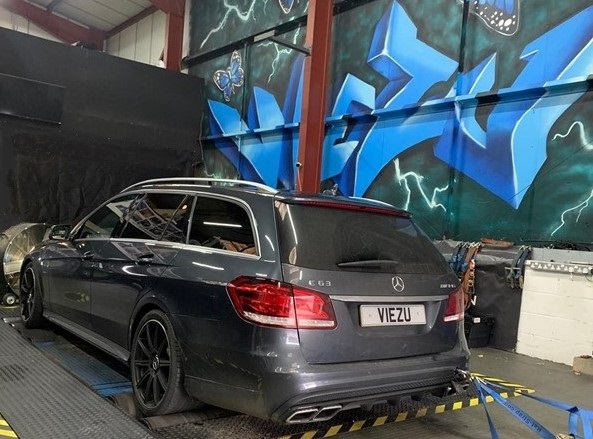 The power output after tuning the AMG 63 was phenomenal, there is simply no other way to describe it. The car was losing traction at 130mph on the dyno such was the sheer amount of torque the engine could now release to the wheels with the Viezu Technologies remapped tuning file uploaded.

With the wheels spinning and losing traction the final numbers are much higher than the numbers recorded on the dyno. Even with added ballast and additional strapping added to the car there was simply no way the tyres could hold the power on the knurled rollers on the dyno. Some new super grippy tyres and the car will be back on the dyno another time to be run again.

The final numbers on the dyno with excessive wheel spin losing traction of the Mercedes AMG tuning was … 685hp and 1149nm (848 ft lbs) of torque. That is an increase of over 100hp and over 300nm over stock and that was with wheel spin!

This performance remapping from Viezu Technologies custom file writing and technical support team is just single snapshot of the huge range of Mercedes vehicles that Viezu Technologies ECU remapping team support. With vehicles from BMW, MERCEDES, VW AUDI amongst some of the most popular German vehicles for tuning from Viezu, the total range of vehicles supported by Viezu’s engine tuning and performance upgrades extends to virtually all makes and models of vehicles from US manufacturers, EU to the Far East and everything in between.

Click HERE to look up your Mercedes Tuning results and enquire